Take note of the last lines of 1 Corinthians 15. In this chapter, Paul has gone on and on about the resurrection of Jesus and how our faith hangs upon that fact. Because Jesus lives we are assured a blessed future. Our weak and corruptible bodies will be transformed in a flash. Because Jesus lives, so will we. But that future tense doesn’t mean the Christian life is gazing off on the horizon. We do look ahead and can sing a triumphant song, as Paul does, because in Christ we have the victory. But in Christ we still live our lives in the present. Paul writes:

Therefore, my beloved brothers, be steadfast, immovable, always abounding in the work of the Lord, knowing that in the Lord your labor is not in vain.

He says “therefore” showing that this line is building upon the truth of the resurrection and our future hope. Because we will be made new in Christ, we now work for the Lord in all we do. The Christian hope does not remove our responsibilities for this life. Rather it should give us all the more reason to work for Christ’s kingdom today, knowing that such labor will never be in vain.

Continuing the topic of resurrection in chapter 15, Paul voices some of the questions or objections that he has heard to this fantastic notion of the dead being raised. Some have asked how this happens? If in fact it does happen, what sort of body will they have?

Paul uses several mini-parables to answer this, looking at seeds, animals, and celestial bodies. Even with his concise illustrations this can still be a difficult passage. Or maybe I should say, of course it is a difficult passage. Resurrection is not an easy thing to believe in. In a very literal sense, it’s not natural for us. Nature allows for birth and death, but no more. The resurrection is supernatural.

For such an amazing concept, maybe watching a short video will help. Here’s NT Wright on resurrection and its understanding in the first century. It’s not very long (6 min), but it is part of a much longer video, if you’re feeling adventurous.

We’re back to having a Bible visualization this week. (I’m still trying to catch up on last week.) 1 Corinthians 15 is a powerful chapter on the resurrection of Jesus Christ and what that means for us as well. Paul puts it succinctly near the end as he lays out a great contrast. We all face death and are under the power of sin. The law could do nothing to save us from such a fate. Then Paul uses that wonderful, good news-filled, gracious phrase: but God. Or at least in this section, “but thanks be to God.” Death is not the end nor does sin have the power. God, through Jesus Christ, gives us the victory over such things in his death and resurrection. 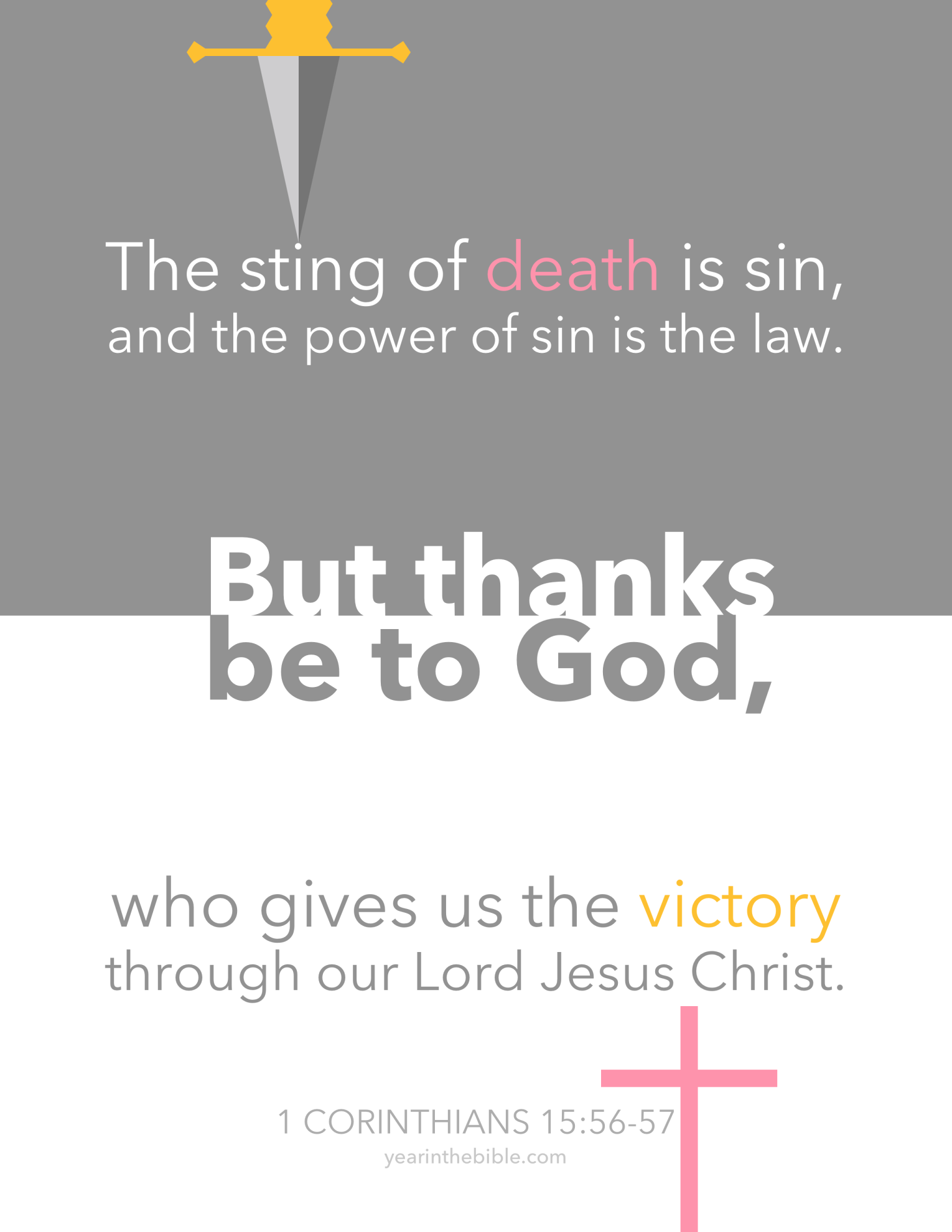 Paul structures the section we read this week in two parts, and the second flows from the first. First we look to Jesus Christ and his resurrection. Paul mentions what here is of "first importance." These are core events to the Christian faith, and without them–without Christ then the we would have nothing else. But since we do have such a hope that has been passed on to Paul, to the Corinthians, and through generations to us, then we see in what follows that Christ’s resurrection provides a way for our resurrection.

Christ’s resurrection is like the bottom Jenga piece that if you remove, everything else falls apart. If Christ is not raised from the dead, as Paul writes, "we are of all people most to be pitied."

In Mark 12 the Sadducees confront Jesus with questions about resurrection. They create a complicated hypothetical involving seven brothers, no children, and a wife who had been passed along once these brothers die in succession. They ask Jesus whose wife will this woman be? It is a bizarre question, and it is being asked by Sadducees who in fact deny the truth of the resurrection. They either want to trap Jesus or make resurrection out to be a ridiculous belief.

But Jesus replies saying that they really don’t know what they’re talking about. They know neither the Scriptures nor the power of God. These deniers of the resurrection do not understand the resurrection at all.

Resurrection is a key belief in Christianity, and it is right there in the creeds that we recite. But do we get our understanding from God and his word or from pop-culture and its movies and books?

This article, which I originally read in a Newsweek, waiting at the doctor’s office, can be found here (Daily Beast). It looks at that tension that people have in which they believe in an afterlife, but have trouble with a bodily resurrection. But, as the article ends, “Resurrection may be unbelievable, but belief in a traditional heaven requires it.”

As the title says, the resurrection is incredible. You can read it two ways. The accounts of the resurrection of Jesus are not credible nor is the belief that our fate is the same. Or you read it as saying the fact that Jesus was raised from the dead, signifying the death of death for all who believe in him, is simply a wonderful truth and cause for great hope.

This is a few hours early, so maybe just wait until morning to watch this. I think this song captures a great tone of triumph and joy, which should characterize Easter Sunday.