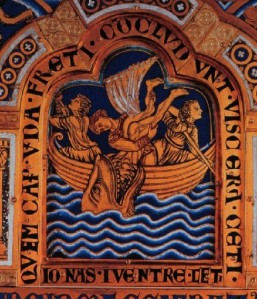 This week we are reading passages that are written in a time when Israel has now come to possess the land that God has promised to them. God was faithful to Joshua and led the people to the land that was flowing with milk and honey. He was fulfilling the promise he had made to Abraham. But the people fail to be a blessing to others and fail to live in the way they were called to. In Amos we read how Israel is oppressing the poor and weak, treating them much like they were treated when they were slaves in Egypt. In Jonah we see the lengths Jonah would go in order not to go to his enemy, instead preferring Nineveh’s destruction.

Then when we look in the New Testament in Matthew 23, Jesus is criticizing the leaders of the Jews who similarly are not living as a blessing to those around.

This last Sunday I preached on Jonah, looking closely at his reluctance to even be a possible blessing to his enemy. The good news is that we have one who willingly came to his own enemies and sacrificed himself for us.

If you’re interested in reading the sermon, you can find it here.